Site provided for information only. This site is not accessible to the general public and no attempt should be made to do so.

Carclaze Pit, close to St Austell has been worked for both tin and china clay (kaolin). The remains of the pit workings, including the funicular railway, can still be seen. Carclaze was one of the main pits operating in the 18th and 19th Centuries, and a common field trip location for European geologists.
Rocks & Minerals

The pit exposes one part of the St Austell Granite and is comprised of Permian-aged lithium mica tourmaline granite. Here, the granite is whitish grey and medium- to coarse-grained with quartz, plagioclase feldspar, lithium-bearing biotite micas, tourmaline and white alkali feldspar phenocrysts up to 25 mm. Due to the abundance of tourmaline, the granite is therefore termed a “tourmaline granite”. Accessory minerals in the granite include niobium-bearing rutile, fluorite, secondary muscovite and apatite; these are typically best observed using a microscope.

There are a series of greisen-bordered quartz-tourmaline veins within the site. The veins are orientated east-west, and dip southwards. Cassiterite is dominantly contained within the veins, but occasionally within the kaolinised granite between the veins. The mineralisation style is very similar to that seen at Cligga and St Michaels Mount, but there is limited tungsten compared to these locations.

Why is this here?

The St Austell Granite is part of the large mass of granite that lies underneath southwest England termed the Cornubian Batholith. The Carclaze granite formed in the Early Permian and is approximately 275 million years old. All of the granites in southwest England formed at the end of the Variscan Orogeny, a mountain building event. During mountain building events, heat and pressure results in melting of the crust. As the earth’s crust was stretching apart at the end of the Variscan Orogeny, these melts were emplaced through fault systems over millions of years.

As the granite cooled, internal stresses resulted in the formation of vertical joint sets (fractures in the rock). Fluids escaping from the granite used these joint sets, resulting in the greisen-bordered veins and precipitation of the tin mineral, cassiterite.

China clay formation, termed kaolinisation, occurs when the mineral feldspar within the granite is broken down to form clay minerals, predominantly kaolinite. There has been debate over the origin of the china clay, particularly around whether it is a weathering process or due to hydrothermal fluids. The most recent studies indicate that the kaolinisation is due to low-temperature (50-100°C) hydrothermal fluids migrating through pre-existing fractures in the granite during the Late Jurassic to Early Cretaceous (146 million years ago).

The rocks exposed within the Carclaze Pit were first worked for tin and copper ores; the earliest record of the geology was in 1764, although there is likely to have been extraction before this time. Throughout the 18th and early 19th Centuries, the pit was visited by a number of key European geologists at the time, who mapped the mineral veins and geological variation of the granite. By the mid-19th Century, production switched to china clay, with the formation of two china clay pits, Old Baal and New Baal.

The funicular railway was horse-powered and used to remove tin and china clay from the base of the pit to the top. Waste from the china clay extraction has largely been re-sculpted into rolling hills and vegetated, but near to the pit a distinctive white pyramid, known as the mountain, the pyramid or the sky tip is a reminder of the old mining landscape. Much of the waste in the tip has likely come from the nearby Great Treverbyn Pit, but it is very much a local landmark!

Extensive development is planned for the area around the old Carclaze pit. Designated a garden village and receiving national government funding, there are plans for 1500 houses, a school, health care facilities and spaces for businesses.

On the left is the plane polarised image, with the cross polarised image on the right. Mineral abbreviations: Li Mca – Lithium-bearing mica (Zinnwaldite in this instance); Pl – Plagioclase; Qtz – Quartz; Rt – Rutile. In the Carclaze Granite, rutile contains significant niobium. For more information about looking at rocks under the microscope click here. 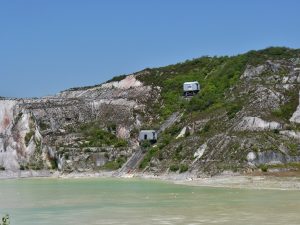 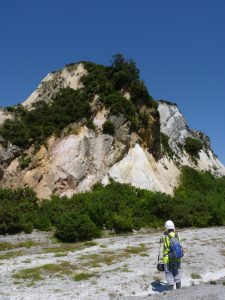 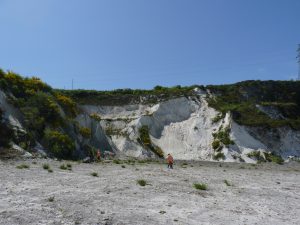 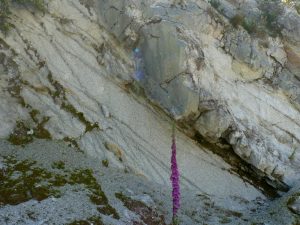 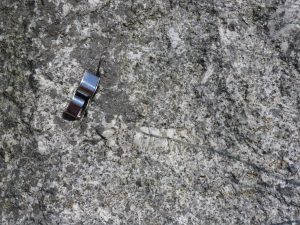 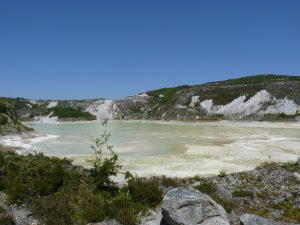 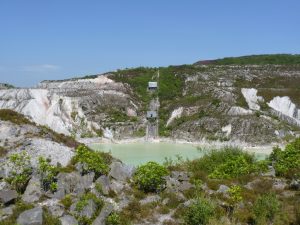 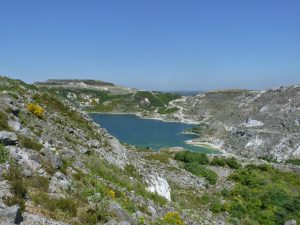