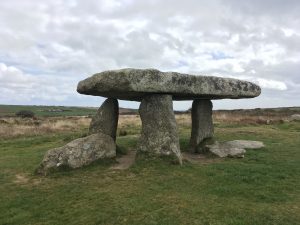 Information here is provided for reference only. You should ensure you have suitable footwear and clothing when visiting all sites.

History
Lanyon Quoit, located on the Penwith moors, is thought to date from the early Neolithic period (3500-2500 BC). It is a dolmen, a type of single-chamber megalithic tomb characterised by vertical stones, or megaliths, supporting a horizontal stone, termed a capstone. Dolmens are thought to have been in existence since about 7000 years ago. There are quite a few dolmens scattered around Cornwall in various states of completeness.

Lanyon Quoit is probably the most famous, but has undergone a few changes since the Neolithic. In 1815, the original 4 megaliths and capstone collapsed in a storm. When the monument was reconstructed in the 1820s, it was replaced in a different position, with only 3 megaliths, all of which were shortened and flattened before the capstone was replaced. The quoit is now lower and in a different orientation than originally intended.

Geology
The quoit is constructed from coarse-grained, porphyritic biotite granite. This type of granite is common in the Land’s End Granite, which is part of the large mass of granite that lies underneath southwest England termed the Cornubian Batholith. The granite formed in the Early Permian and nearby granite at Newmill is dated as being 275 million years old. All of the granites in southwest England formed at the end of the Variscan Orogeny, a mountain building event. During mountain building events, heat and pressure results in melting of the crust. As the earth’s crust was stretching apart at the end of the Variscan Orogeny, these melts were emplaced through fault systems over millions of years.
Why is this here?
Lanyon Quoit, along with other quoits in the area, was probably designed as a tomb. Bodies may have been subject to excarnation on the capstone, before the bones were buried underneath. Over the years, people have excavated the site searching for treasures, and in the 18th Century excavations reported finding a long, shallow grave (termed a barrow). More recently, the quoit has been the location of various rituals and protests, with people trying to set it on fire in 1999.
Gallery 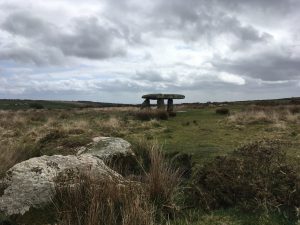 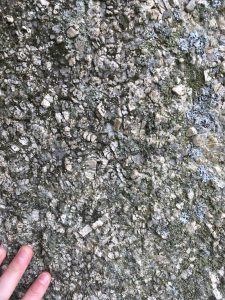 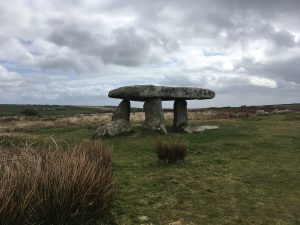 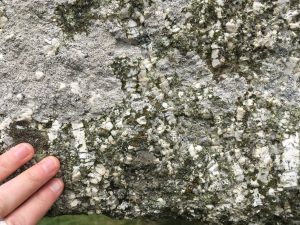 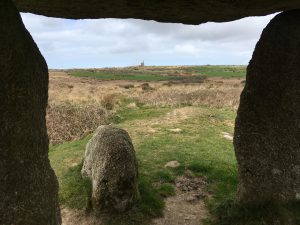 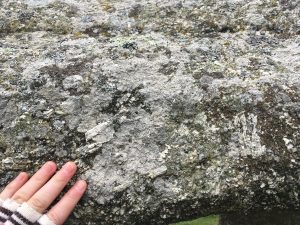