At unsuspecting Mawnan, an unusual mantle-derived rock, known as a lamprophyre, crops out in the foreshore at low tide.
Rocks
A Permian-aged mantle rock known as a lamprophyre crops out almost directly to the east of the church of St Mawnan and St Stephen. Scramble down from the coast path at the northern end of the beach section at low tide only if visiting. The dyke is orientated northeast-southwest and dips steeply toward the southeast, forming a distinctive brown contrast to the grey host rocks. Overall, the dyke is up to 6m across and forms a sharp contact with the host rocks.

The lamprophyre intruded into the Devonian-aged Portscatho Formation, a series of interbedded grey and greenish grey sandstones and mudstones with occasional siltstones. The Portscatho Formation displays multiple generations of cleavage, folding and microfaulting, relating to tectonic extension, compression and extension again during the mountain building event, the Variscan Orogeny.

Minerals
The Mawnan lamprophyre is a minette lamprophyre, meaning it has more alkali feldspar than plagioclase. Golden coloured phlogopite micas, rounded xenocrysts of quartz and iddingsite phenocrysts (orange replacement mineral after olivine) are set in a fine-grained groundmass of alkali feldspar, plagioclase feldspar, apatite and iron oxides. Much of the original mineralogy is obscured by later alteration by calcite-bearing fluids, resulting in the replacement of primary minerals by dolomite; this is common to lamprophyres across the southwest.

Occasionally, there are pockets of granitic appearing minerals, with globules of alkali feldspar, quartz, plagioclase and mica. These are often “smeared” across the lamprophyre outcrop, as if they have been disaggregated by the lamprophyre melt.

Why is this here?
Lamprophyres are unusual rocks, derived from deep in the earth; they have similarities with kimberlites. They are unusual, for their ultra-potassic nature (i.e. they have a lot of potassium in their chemistry) and occurrence as small volume dykes in a variety of different tectonic settings. They are very difficult to classify, due to the variability of their mineralogy and geochemistry.

In southwest England, the lamprophyres intruded during a period of post-orogenic extension in the Permian and they are contemporaneous to the Cornubian Batholith. A dominant mantle source is inferred from geochemistry and isotopic data; it is this mantle source that would have melted during the post-orogenic extension to form the lamprophyre. The lamprophyre likely mixed with granitic melts at the same time, evidenced by the inclusion of granitic material in the dyke at Mawnan. 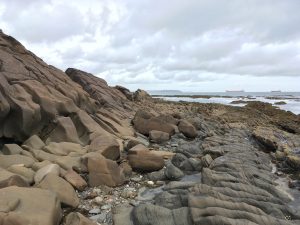 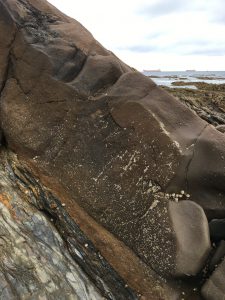 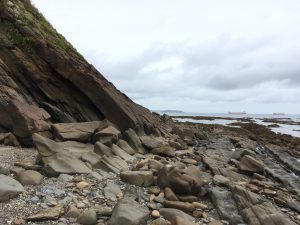 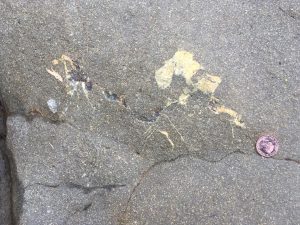