At Megiliggar Rocks, you can find the “roof zone” of the Tregonning Granite, where volatiles (the “stuff” that won’t fit in typical granite minerals) have accumulated. The site has spectacular granite sheets with pegmatite-aplite-line rock extending across the cliff section and an elvan.

Rocks
The Permian-aged Tregonning Granite can be found across the beach and intruded into the Devonian-aged Mylor Slate Formation. Within Legereath Zawn there is an elvan (quartz porphyry).

Granite sheets extend across the cliff from Legereath Zawn and dip gently towards the east, before fading from sight. The sheets have complex layering, best seen in fallen blocks on the beach, of leucogranite, pegmatite, aplite, tourmaline-rich and mica-rich bands (“line rock”). The sheets also contain fragments of the Mylor Slate Formation, which can reach a couple of metres across. There are areas where the host rock appears to be peeling off into the granite, partially being reabsorbed.

Minerals
The Tregonning Granite is pale grey and medium-grained with very rare alkali feldspar phenocrysts. Micas, the shiny platy minerals, are lithium-rich, termed zinnwaldite or polylithionite mica. White plagioclase is the albite member (lots of sodium). There is widespread topaz and the Tregonning Granite is therefore commonly termed a “topaz granite”. Tourmaline and apatite are common minerals, with rare elbaite pink-green tourmaline and needles of black tourmaline in the sheets on the contact with the slates.

Within the pegmatites there are unusual accessory minerals to find in a granite, including arsenopyrite, löllingite, molybdenite, cassiterite, columbite and wolframite. Rutile is often enriched in tin, niobium and tantalum. Vugs within the pegmatites have also previously been described as containing a purple-coloured apatite.

Why is this here?
The sheets have intruded along planes of weakness in the host slates, pushing apart layers within the slates and inflating them as they go. The granites and the sheets intruded during a period of tectonic extension; as the crust was pulling apart, this helped to make the space into which the granite and the sheets could move into.

The layered sheets are complex, and aren’t cyclical. As minerals such as feldspar and quartz crystallised, elements like boron, lithium and iron, which are not present within quartz and feldspar, increased to a critical threshold at which minerals such as tourmaline and mica could crystallise. This is not cyclical and there are multiple intrusive events with multiple vapour and liquid phases with semi-cooled rock. It’s like injecting multiple generations of hot plastic one on top of the other, with the new hot plastic smearing and breaking the semi-cooled and cooled old plastic.

The Mylor Slates are occasionally partially assimilated into the granite, but globular, lobate contacts are relatively rare, the majority are sharp. Occasionally trapped fluids beneath xenoliths have resulted in zones of pegmatite formation or helped the growth of elongate tourmaline. 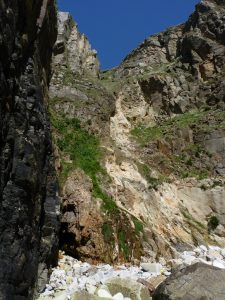 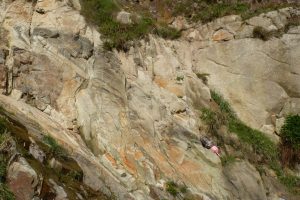 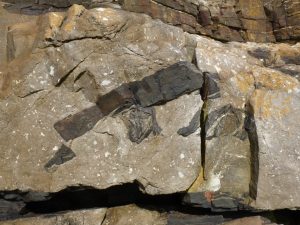 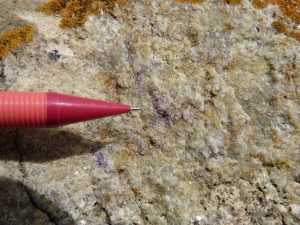 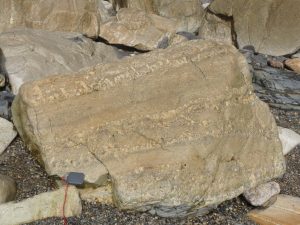 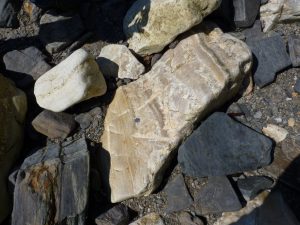 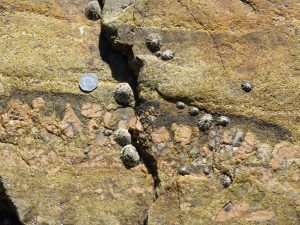 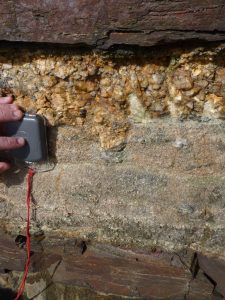 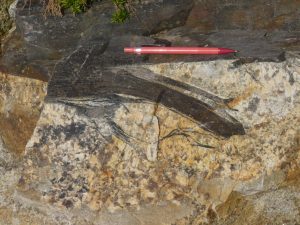 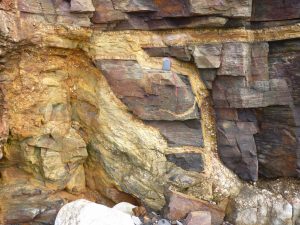