Information here is provided for reference only. You should ensure that you have permission from the landowner and take safety precautions when visiting sites. Always check tide timetables before visiting coastal sites and remain aware of cliff falls.

At Trevaunance Cove you can see coastal exposures of the Porthtowan Formation that haven’t been metamorphosed by intruding granites. The rocks retain structures relating to the Variscan Orogeny. Several sulphide-bearing mineral veins are exposed in the cliff section. A fallen harbour is a remnant of a rich mining history.

Rocks and mineralisation
The Devonian-aged Porthtowan Formation consists of interbedded light grey sandstones and dark to green-grey mudstones. These rocks have experienced low temperature and low pressure metamorphism before, during and after Variscan collision.

St Agnes was one of the richest areas of Cornwall during the 18th and 19th Centuries due to mining. The fallen granite blocks on the beach are remnants of a harbour that was used to ship ore from St Agnes. The waste tips for the Penhalls and Wheal Kitty mines lie at the top of the cliff.

Tectonic features
The Porthtowan Formation mudstones and sandstones show two sets of slaty cleavage, termed S1 and S2 that indicate differing tectonic movements. A slaty cleavage refers to closely spaced, parallel planes of weakness that form in metamorphosed sediments. Recumbent folds plunge gently towards the SSE and there are micro faults across the sedimentary layers. Bedding parallel quartz veins are folded along with their host sediments.

Extensional faults, orientated east-west, almost parallel to the beach dip gently to both the south and the north. The latter are one of the reasons for significant cliff falls along the “back” of the beach. The faults may be due to either regional tectonic extension or localised tectonic activity. The faults offset the mineral lodes, something that is recorded in old mining literature; the faults are termed “slides” and are detailed in cross sections of the local mines.

Why is this here?
The interbedded mudstones and sandstones of the Porthtowan Formation formed in a deep ocean in the Devonian period, around 380 million years ago. The sediments were deposited by turbidity currents, an underwater current of fast-moving sediment, in a deep ocean trough. They underwent low temperature and pressure metamorphism during the Permian.

The mineral lodes formed from hot fluids exsolving from cooling granites at depth along with meteoric (surface) waters circulating through the rocks. Metals were derived from a combination of the granites and host sediments as the fluids circulated. 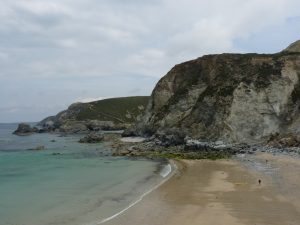 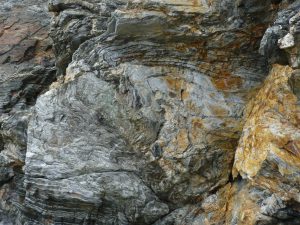 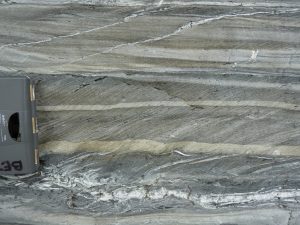 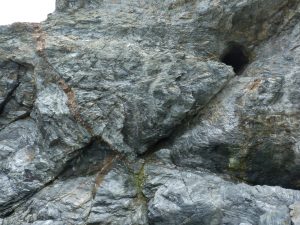 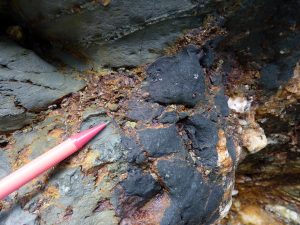 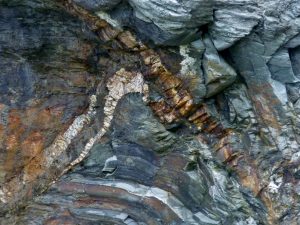 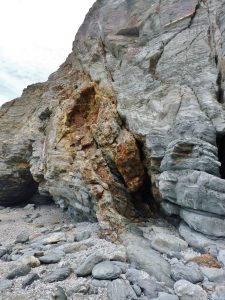 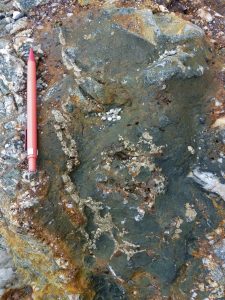 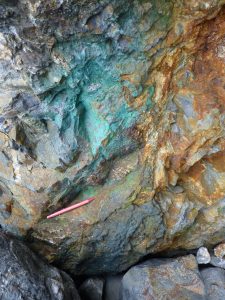 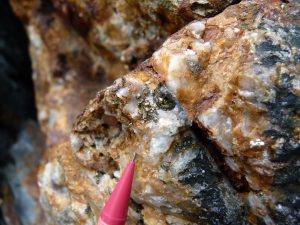