Highlights: Granite, quarrying
Location: SX 1014 7539
What’s nearby: Cheesewring, Delabole
Conservation: Situated on Bodmin Moor – an Area of Outstanding Natural Beauty
A footpath runs through the southern part of the site, passing around the active quarry. Care should be taken when walking around the site, and if the path is closed, no attempt should be made to access the area. The active quarry is off limits at all times.

De Lank quarry has produced two mica granite, and some elvan, since the 1860s. Stone from the site has been used in parts of the Thames Embankment, London Bridge and the Lady Diana Memorial.

Rocks & Minerals
The entirety of Bodmin Moor is comprised of Permian-aged two mica granite. At the De Lank, the granite is grey and medium- to coarse-grained with quartz, plagioclase feldspar, biotite, muscovite and white alkali feldspar phenocrysts up to 25 mm. Due to the presence of both biotite and muscovite micas, the granite is therefore termed a “two mica granite”. Accessory minerals in the granite include andalusite, tourmaline, topaz, ilmenite and rutile; these are typically best observed using a microscope.

How is this here?
The Bodmin Moor Granite is part of the large mass of granite that lies underneath southwest England termed the Cornubian Batholith. The De Lank granite formed in the Early Permian and is approximately 290 million years old. All of the granites in southwest England formed at the end of the Variscan Orogeny, a mountain building event. During mountain building events, heat and pressure results in melting of the crust. As the earth’s crust was stretching apart at the end of the Variscan Orogeny, these melts were emplaced through fault systems over millions of years.
Quarrying & Heritage
The De Lank Quarry, named for the adjacent river, opened in the mid-1800s and produced stone for the Liskeard and Caradon Railway. Granite from the quarry was used for Tower Bridge, London as well as the Bishop Rock and Eddystone lighthouses. The site is a collection of quarries, with different areas of the site being used for specific projects. Narrow elvan dykes also cross the site, which have also been quarried. A branch of the Bodmin-Wadebridge railway served the quarry, allowing extracted stone to be transported to Wadebridge Quay.p>

Once one of many granite quarries on the western edge of the Bodmin Granite, today, only the northern No. 1 Gully quarry is worked. The quarry workers utilise a combination of the natural joint sets in the granite, thermal lances and minor explosives to extract the stone. There are a number of workshops containing different sized saws, as well as processing equipment used to texture and shape stones. De Lank Quarry produces a number of products including building stone, kerbstones, cladding stone, and sleeper stones, as well as bespoke masonry.

Under the microscope
On the left is the plane polarised image, with the cross polarised image on the right. Mineral abbreviations: And – andalusite; Bt – biotite mica; Kfs – Alkali feldspar; Msc – Muscovite mica; Qtz – Quartz. 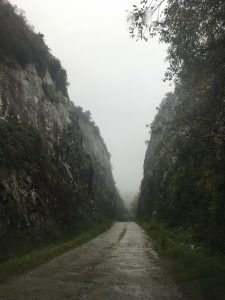 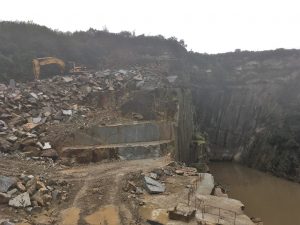 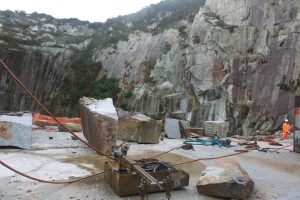 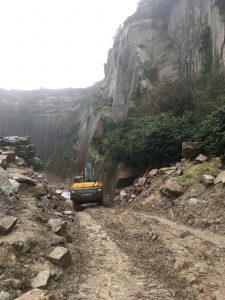 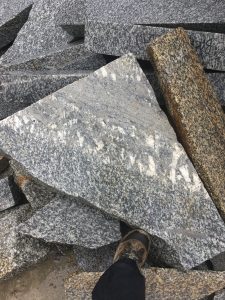 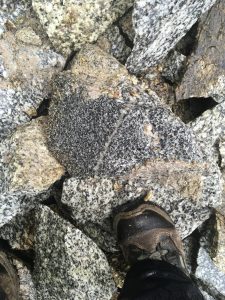 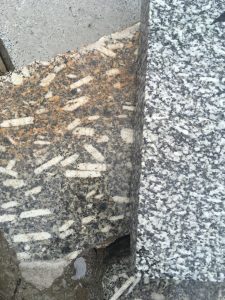 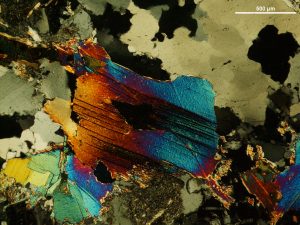 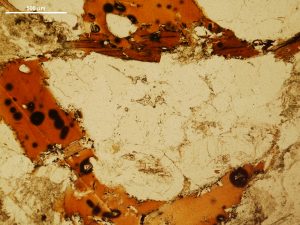