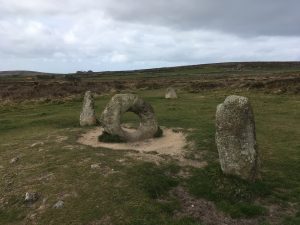 Information here is provided for reference only. You should ensure you have suitable footwear and clothing when visiting all sites.

History
The Mên-an-Tol (meaning “the stone of the hole” are a small collection of standing stones, located on the Penwith moors. They are thought to date from the late Neolithic or early Bronze Age. Today, the monument has four stones – two upright stones either side of a holed stone, with a fallen stone at the bottom of the western upright stone. Early descriptions by William Borlase in the 18th Century suggested that the monument had a triangular shape, so it is likely to holed stone has been moved to sit between the uprights. A survey also identified several flat stones just beneath the ground, suggesting there could have been a stone circle. The holed stone may have come from a nearby portal tomb.
Geology
The quoit is constructed from coarse-grained, porphyritic biotite granite. This type of granite is common in the Land’s End Granite, which is part of the large mass of granite that lies underneath southwest England termed the Cornubian Batholith. The granite formed in the Early Permian and nearby granite at Newmill is dated as being 275 million years old. All of the granites in southwest England formed at the end of the Variscan Orogeny, a mountain building event. During mountain building events, heat and pressure results in melting of the crust. As the earth’s crust was stretching apart at the end of the Variscan Orogeny, these melts were emplaced through fault systems over millions of years.
Myths
There are many myths about the Mên-an-Tol, particularly relating to the holed stone. If females crawl through the holed stone on a full moon, she will soon become pregnant. Local farmers reportedly used to crawl through the stone to relieve their pains. And if you’re unfortunate enough to have your baby stolen by a fairy and replaced by a changeling, passing the changeling through the holed stone will return the real child to the mother.
Gallery 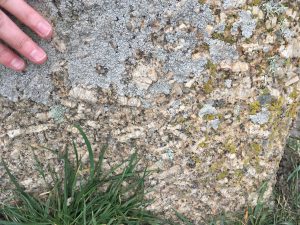