Roche Rock is a rocky outcrop on the northern flank of the St Austell Granite. It is unique and comprised almost entirely of quartz and tourmaline. There is an ancient chapel built into the outcrop, likely dating from the Medieval times. Roche itself is an unusual place name for Cornwall, likely derived from Old French or Middle English meaning a stony hill.
Rocks & Minerals
The craggy ridge at Roche is comprised of massive quartz-tourmaline (MQT) rock. This rock is medium-grained (1-3 mm sized minerals) with tourmaline dominant over quartz. The tourmaline is euhedral (well-shaped) to subhedral, forming lath-shaped grains intergrown with quartz. There are few accessory minerals at Roche Rock, but zircon, apatite, topaz and mica are variably present.

Quartz veins crosscut the outcrop, and there are vuggy zones of tourmaline and quartz, occasionally also containing lithium mica (zinnalwdite) and topaz. In the veins, the tourmaline frequently contains cores of quartz. There are other small occurrences of MQT within the St Austell and Land’s End Granites.

Geological Map
Under the Microscope
Tourmaline from the MQT rocks is strongly zoned, with colour variations from dark brown to pale yellow and blue rims. On the left is the plane polarised image, with the cross polarised image on the right. Mineral abbreviations: Qtz – Quartz; Tur – Tourmaline. For more information about looking at rocks under the microscope click here.

The origin of MQT rock has often been debated, in part because contacts with the granites are often obscured. Two main theories have emerged: (1) that MQT represents late-stage residual liquids left after crytsallisation of granites and (2) that MQT rocks are hydrothermal replacement of original granites by boron-rich fluids. Debate is ongoing, with recent work looking at textures using automated mineralogical techniques indicating that replacement may be a viable option. What is certain, is that that MQT rock formed from magmatic fluids of some kind; fluid inclusion studies and studies of mineral chemistry indicate that the formation fluids and tourmaline are similar in composition to tourmaline within the granites.

Roche Chapel
During excavation for a housing development in Roche, Neolithic pottery and other remains were uncovered, indicating the area around the rock has likely been a site of interest for thousands of years. The distinctive chapel, cut into the MQT rock and constructed from local granite, was built in the early 15th Century and dedicated in 1409. There is a lower room, which was reportedly lived in by a hermit, and an upper chapel, with the lower room built first and used to shelter the lovers Tristan and Iseult as they fled Iseult’s husband, King Mark of Cornwall. 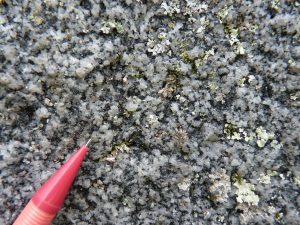 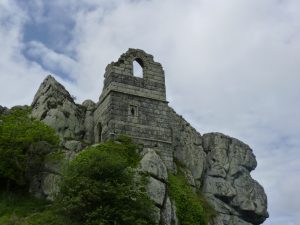 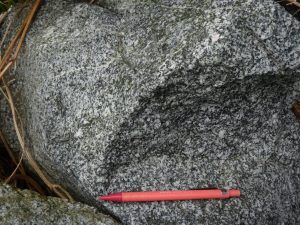 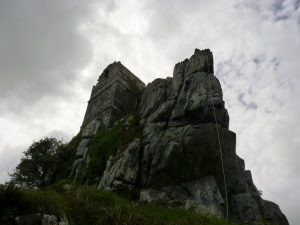 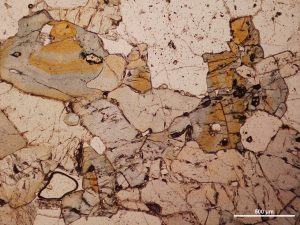