An elvan (granite porphyry) dyke cuts across the Mylor Slate Formation in the western foreshore of Praa Sands. A raised beach and peat deposits can be found stretching across the centre of the beach. The Tregonning Granite is exposed at the far eastern edge.
Rocks & Minerals

A Permian-aged elvan (granite porphyry) dyke orientated in a northwest to southwest direction is exposed at the western edge of the beach. The elvan is intruded into the Devonian-aged Mylor Slate Formation which has been thermally metamorphosed, forming a baked margin along the dyke contact. The Mylor Slate Formation rocks are dark grey, crosscut by many white quartz veins. Features such as bedding, cleavage, folding and micro-faulting can be found. The bedding gives the rocks a striped appearance.

The elvan reaches 16m across and shows textural and mineralogical variation across the outcrop. Fine-grained quartz-feldspar-mica bands with rounded quartz phenocrysts and tabular alkali feldspars form narrow bands on the edges of the dyke, at the contact with the slates. The main part of the dyke has a dark medium- to coarse-grained groundmass with tabular alkali feldspars and rounded quartz. Dark tabular biotite and tourmaline are visible. The alkali feldspars are noticeably zoned and orange due to the presence of iron.

At the far eastern end of the beach is the contact between Tregonning Granite and the Mylor Slate Formation sediments. Granitic veins crosscut the metasediments, with layers of pegmatites and aplites, although not as extensively developed as those at Megiliggar Rocks
Quaternary Deposits
In the cliff section behind the elvan, there is a raised beach section (palaeosol) comprising cobbles and boulders of elvan and Mylor Slate Formation overlain with a sand dune system. The sand between the cobbles and boulders is iron-cemented and distinctly orange. A low platform of peat is exposed across the central part of the beach above the high tide line. Studies date the peat as 1300-1900 years old (Holocene). The sand dune system behind the beach is undergoing recession due to increasing intensity of winter storms coupled with human activity.
Why is this here?
The elvan has likely emplaced as several pulses of melt, shown by the textural and mineralogical variation across the dyke. Elvans are closely associated with the granites of southwest England and show a similar mineralogy and geochemistry to the younger granites. Across the southwest, elvans share a common orientation, east-north-east. The Praa Sands Elvan has a different orientation, and has likely intruded along a fault related to a concealed granite ridge. The layered pegmatite-aplite-granite at the eastern end of the beach has formed through similar mechanisms to that at Megiliggar Rocks, with multiple changes in pressure and injection of granitic melt causing variation in textures and mineralogy.

The raised beach and peat most likely formed in a swampy valley during a period of lower sea level. Storm events would have led to influxes of coarser material. Peat typically forms in wetland environments under acidic and anaerobic environments 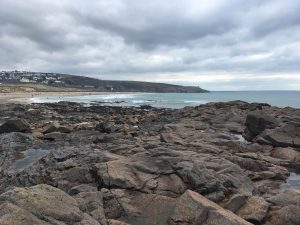 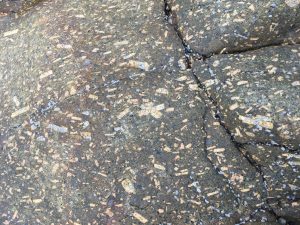 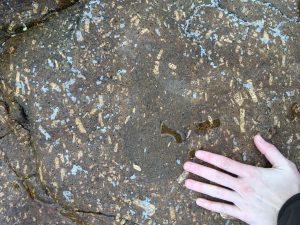 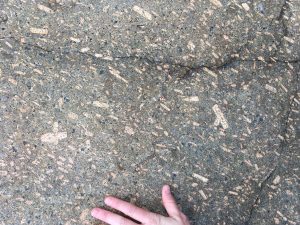 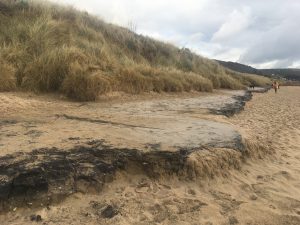 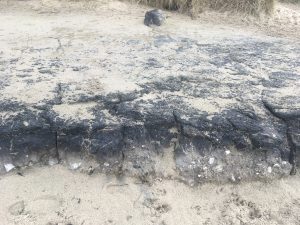 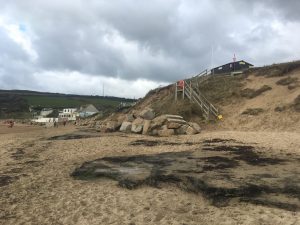 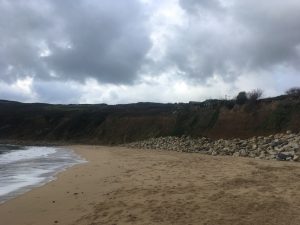