The roof of the Tregonning Granite and contact with the surrounding Mylor Slate Formation is exposed at Rinsey Cove, along with granite sheets and pegmatite. The slates have been metamorphosed to spotted hornfels. Wheal Prosper engine house sits on top of the cliff.

Rocks
The Permian-aged Tregonning Granite can be found on either end of the beach with the Devonian-aged Mylor Slate Formation in the middle. Granite pegmatite veins extend out towards the sea across the foreshore; these are visible depending on the height of the sand. The veins can also be seen in the cliff section beneath the Wheal Prosper engine house.

Within the slates, features such as bedding, cleavage, recumbent folding and micro-faulting can be found. The bedding gives the rocks a striped appearance. Quartz veins formed at the same time as the slate are also faulted and folded. Further quartz veins crosscut the slates.

In the cave beneath the Wheal Prosper engine house, along with the granite vein, there is a large fault that has been infilled with a quartz-iron oxide-sulphide mineral vein.

Minerals
The Tregonning Granite is pale grey and medium-grained with very rare alkali feldspar phenocrysts. Micas, the shiny platy minerals, are lithium-rich, termed zinnwaldite or polylithionite mica. White plagioclase is the albite member (lots of sodium). There is widespread topaz and the Tregonning Granite is therefore commonly termed a “topaz granite”. Tourmaline and apatite are common minerals, with rare elbaite pink-green tourmaline and needles of black tourmaline in the sheets on the contact with the slates.

The Mylor Slates have been thermally metamorphosed by the intruding granite to spotted hornfels close to the granite contact. Locally, splodgy cordierite and / or andalusite needles have formed. Tourmaline is common alongside slate xenoliths enclosed within the granite.

Why is this here?
The pegmatites along the contact zones formed from the late-stage accumulation of melt and fluids from the Tregonning Granite as they were trapped along the contact zone with the surrounding slates. Heat and fluids emanating from the intruding granites, caused contact metamorphism in the slates resulting in the darkening of the rocks and growth of minerals such as andalusite and cordierite. Pre-existing fractures within the slates enabled the movement of late-stage granitic melts and fluids, forming the pegmatite veins.

The Mylor Slates are occasionally partially assimilated into the granite, but globular, lobate contacts are relatively rare, the majority are sharp. Occasionally trapped fluids beneath xenoliths have resulted in zones of pegmatite formation or helped the growth of elongate tourmaline. 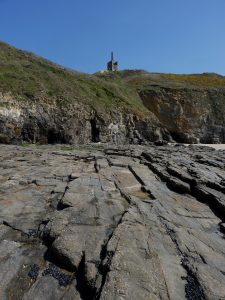 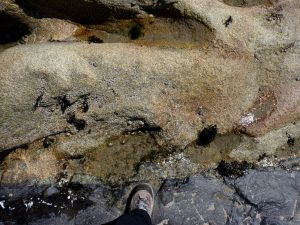 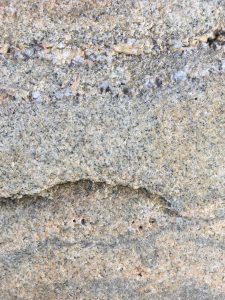 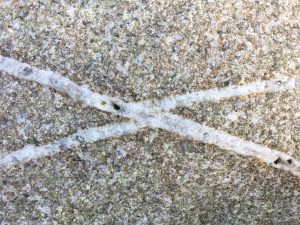 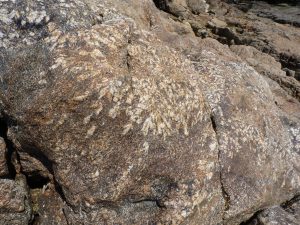 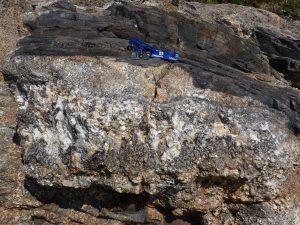 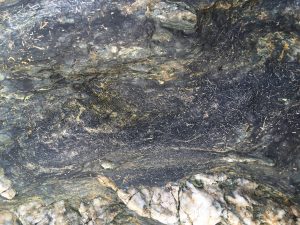 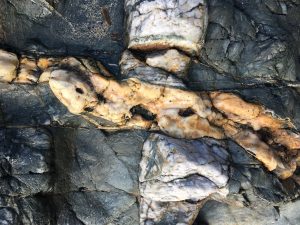 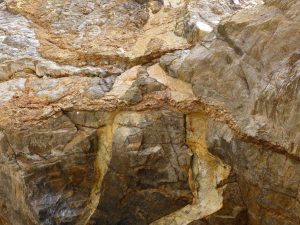 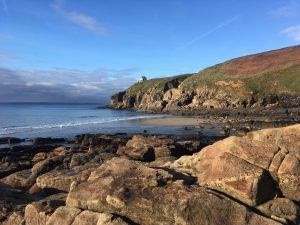